The Very Close to Perfect Day

There are very few perfect days in life, and although today was not one of them, it was pretty darn close.  Things around here have been pretty crazy lately with the family and even though I’ve been trying really hard to keep a positive mental attitude, it’s been a challenge lately.  Especially the last two weeks because, once again, I’ve been getting little to no sleep.  Between the baby having some pretty restless nights and Bean being sick, sleep has been a rare commodity around here.  Then once Bean started feeling better and we thought the rest of us were in the clear, Bubba, Hubby and I all came down with it.  We’re still sick, but on the mend.  If I were able to get a couple of solid nights of sleep, I think I could kick this thing.  But as it is, I’m a snotty, nasty mess and so is my sweet baby.

After that description, you may be wondering how today could possibly be a Very Close to Perfect Day, and if you were to have told me this morning that it was going to be, I probably would have laughed in your face.  But, we decided to buck up and get out of the house because a cold front went through yesterday and it was absolutely gorgeous out today.  In the 70s, breezy with low humidity.  You just don’t waste those days in Southeast Louisiana!  So, after Bubba had a bit of a nap, we packed up the kids and headed out, stopping along the way to pick up some Chic-fil-A (we have a deep and abiding love of CFA in this house).  Then we headed off to the park for a picnic.  We even had a “friend” join us.  We actually had to chase this guy off so we could eat in peace.  He definitely had some personal space issues and at one point was so close to Hubby that he got elbowed in the head! 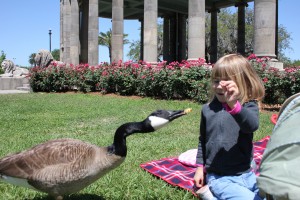 After lunch, Hubby and Bean headed over to the playground and Bubba and I found a place in the shade to hang out on our blanket.  I got some knitting in (I’ll have some finished pictures for you soon, just need to block some stuff).  I’m working on the Meisi gloves (rav link) by Julia Mueller and they are gorgeous!  We had a great time at the park, but after a while the kids were getting really tired so we headed home.  All of us got a bit of rest and after that Hubby and Bean went back outside to wash cars and I made some gumbo.  I gotta tell you, I was really proud of this batch.  Sometimes the roux just comes together so well and the seasonings blend just right.  Today was one of those days. 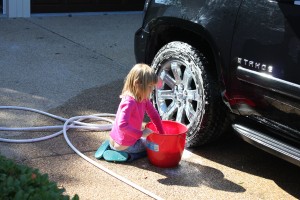 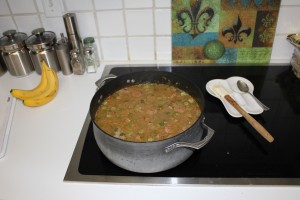 After the gumbo was done and simmering happily on the stove, I called Bean back inside to help me with some baking.  I’ve joined a new sock club this year and along with the patterns and yarn, we get two cookie recipes every other month.  I’ve decided that Bean and I will start making these together.  She just loves helping in the kitchen and although I tend to get impatient with her about making a mess, I need to relax and let her help out.  We had a great time making these cookies and they turned out Delicious.  They are Molten Chocolate Chunk Cookies and unfortunately, I cannot share the recipe with you guys because it’s a condition of the club.  Sorry.  But I will tell you that mine have Ghirardelli dark chocolate morsels and whole Louisiana pecans.  Yumm-E! 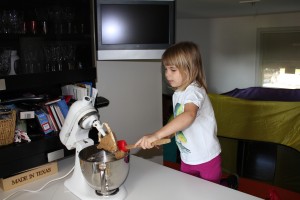 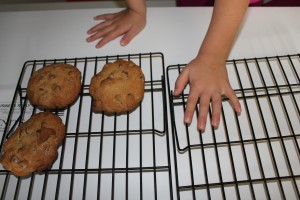 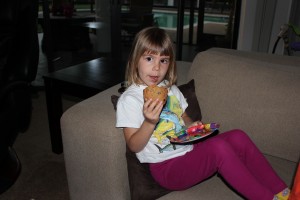 Now we are sitting on the couch watching the “blue cat movie” (Avatar) for the umpteenth time.  The baby is in bed asleep.  Hubby and Bean are cuddling and looking adorable and I’m just happy.  I’m congested and exhausted, but happy nonetheless!  So have a great night, I’m going to sign off and enjoy the rest of mine!

Combine these ingredients in a cake pan and toast in the oven heated to 350 degrees.  Stir it about every five minutes until it starts to turn to a golden brown.

While that is cooking, you can get started on the gumbo itself

Start off by browning the sausage in your big pot in a little bit of olive oil.  After that’s cooked, put the sausage to the side and sautee the trinity mix in the oil and fat until it’s tender. While that’s cooking, slice the sausage into bite sized pieces. Add the chicken stock and heat until it’s at a boil.  At this point, you will take your roux and add about a cup of water to it and stir it into a paste.  Add this paste to the stock and stir well until it’s all mixed in.  Then add the sausage, chicken, shrimp and okra.  Let it boil for about 10 minutes, then reduce the heat to a simmer.  I usually let it simmer for an hour or more to get the spices to meld well and for the okra to thicken it a bit.  Then serve it over rice.

This entry was posted in Eat, Knit, Love. Bookmark the permalink.