Okay, so I have a couple of things that I believed in rather strongly.  The first is that I would never share my private blog on Facebook.  What if I wanted to b*tch anonymously about you guys after all?  The other is that people who have had the phrase “cautionary tale” applied to them or their children should refrain from doling out parenting advice.  But here I am, sharing my blog on Facebook and I am about to apply that descriptor to myself and then proceed to give y’all some advice.  Hypocrisy, thy name is Sarah today. Oh, for those of you joining us from FB, please do not use my kids’ real names in the comments.  Thanks! 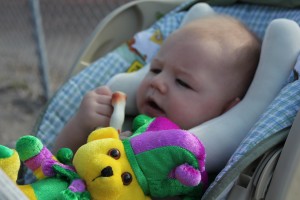 Anyhow, today started out as a very good day.  Bean had her pre-school Mardi Gras parade this morning and it was a beautiful day.  While we were waiting for her to come by in her wagon pulled by an obliging 8th grade “tractor” I snapped this shot of Bubba with his first Mardi Gras teddy bear.  We all love when our kids catch the stuffed animals from the parades.  We beg the riders for them and hold up our babies to show how cute they are and how deserving they are of these Made in China stuffed goodies.  I loved this picture and thought it was SO cute.

A few minutes later, after Bean had gone by in her “float”, I looked down at Bubba and noticed that his bear had no eyes.  Hmmm, that’s strange.  Then I thought about it and realized that Bean’s teacher had been standing next to us, she probably thought they were a choking hazard and pulled them out for him.  So, I didn’t worry about it too much.  The kid was fine, after all.  Anyhow, a little while later, Bubba was fussing and I went to pull him out of his stroller for a little bit of arm-time.  That’s when I saw it.  The little plastic eye.  Just one of them.  Oh. Sh*t!  I searched his seat and couldn’t find the other one.  There was only one place it could be.  So, I immediately called his pediatrician’s office and waited for the doctor to call me back to see how we should proceed.  Yes, I know what you’re thinking, I should just wait for nature to take its course.  But look at the ends of the eye pieces in the picture below.  They are pointy.  They could easily puncture his bowels.  Fotunately, we were past the choking risk, the thing was gone, but there was so much more to worry about.  Plus, how would they do an x-ray to find the thing.  It’s plastic, probably wouldn’t show up.  Oh Lord!  I was freaking out. 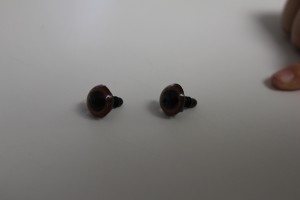 Fortunately, while I was waiting for the doctor to call me back, I walked back over to where we had been watching the parade and looked on the ground.  There was the second eye.  We got lucky and he didn’t eat it.  But things could have gone so much worse.  I wasn’t watching for just a few minutes, but I was less than two feet from the kid.  I never even saw him put it in his mouth.  He could have choked.  He could have swallowed it and punctured his esophogus, stomach or intestines.  He could have died.  And it would have been my fault.

So, basically, the reason I am breaking some of my rules today is to let you know the major mistake that I made today in the hopes that it will help one of you make a better decision than I did today and keep the highly-prized Mardi Gras Stuffies away from your little babies and smaller kids.  I hope you all have a safe and happy Mardi Gras!

(Oh PS, please don’t feel the need to berate my stupidity in your comments, I already feel bad enough.  Thank you)

This entry was posted in Love. Bookmark the permalink.