Our next Brennan’s meal found C and I at Café Adelaide on December 3.  We were joined by my dear friend, Kelly (aka Beer Kelly).  The restaurant is the newest of the Brennan’s restaurants in the city and is owned by the same branch of the family that owns the famous Commander’s Palace.  Adelaide is found in the lobby of the Lowe’s hotel in downtown New Orleans and I think it kind of loses something in that.  The dining room itself is very pretty and the servers were friendly and during the lunch hours they have twenty five cent martinis, so even if it’s not my favorite of the restaurants, it certainly didn’t suck!  (For the record, I only had one martini) 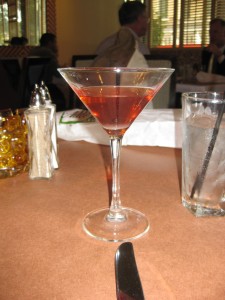 Kelly and I began our lunch with a couple of Cosmopolitans and then perused the menu.  For some reason that day, not much was striking my fancy, so I decided to begin with some Turtle Soup, a dish that the Brennan’s family always does right, and followed that with Adelaide’s Spinach Salad with crabmeat added to make it more of an entrée.  Both were delicious and in spite of my initial mediocre response to the menu offerings, I was very pleased with my choices.  I was having so much fun talking to Kelly that I totally forgot about taking a picture of the soup until it was too late, but you can see that I enjoyed it! 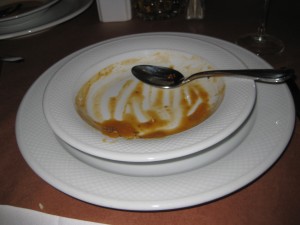 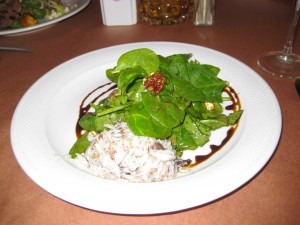 Kelly got a salad as well and added steak to it.  They were very generous with the steak!

An added benefit of eating a little bit lighter for the appetizer and entrée made it possible for us to indulge in dessert!  I got the Creole Cream Cheesecake.  It is delicious and they make it all in house, even down to making their own Creole cream cheese.  I didn’t care as much for the dehydrated berries they used on it, a bit too hard for my liking, but the cheesecake itself was divine.  Kelly got the White Chocolate Biscuit Pudding and we traded off desserts about halfway through.  Hers was really good, too.  It’s not something that I would normally order, but I’m really glad she did because I enjoyed it immensely!  Again, I totally forgot to take pictures of the dessert because we dove into them way to quickly!

C was a very good boy at the restaurant and napped through the better part of the meal (a definite plus when dining with infants).  He proved to be a very good sidekick on my gastronomic journey.

Two Bells down – eight to go!