As I’ve mentioned, one of the greatest parts about living in New Orleans is the food, and, one of the more fun events of the year is the holiday season at the Brennan’s Family of Restaurants.  During the month of December, the Brennan’s restaurants give out jingle bells with ribbons embossed with the restaurant name during lunchtime.  Each year, it’s kind of an informal contest among my friends to see how many of the bells we can amass.  There are ten Brennan’s restaurants in the city, nine of which participate with bells.  Anyhow, this year I decided to get all of them!

To begin my tour de gluttony, C and I dined on December 1 at Ralph’s on the Park.  The setting is beautiful with large windows overlooking the grand live oaks of City Park.  The restaurant is light and airy and seems to be favorite among the “ladies who lunch” in the city.  In fact, there were only two men there who weren’t actually working in the restaurant!

For my lunch I decided to heed the advice of my server and I selected  the oyster and artichoke soup as my starter.  It was a tad saltier than I would normally like, but still very good.  For my entrée I opted for the panko crusted panéed veal and added some lump crabmeat on top of it.  In hindsight, the crabmeat was an unnecessary addition since the veal was incredible and stood just fine on its own.  In fact, I would venture to say that it is one of the finest veal dishes I have ever had, and I’m a woman who enjoys my veal! 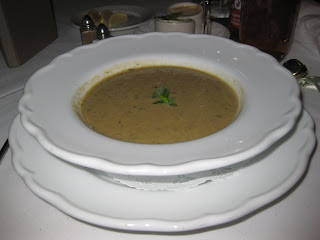 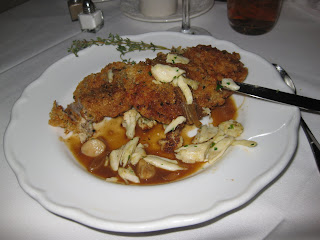 Surprisingly, by the end of the meal I was too full to even attempt to eat dessert, which is a very rare occurrence for me.  I have a bit of a sweet tooth.  But I will be revisiting the restaurant in the very near future (likely on a Sunday) and indulging myself with a piece of their chocolate mousse cheesecake!

One bell down, nine to go! 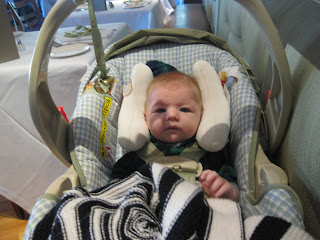 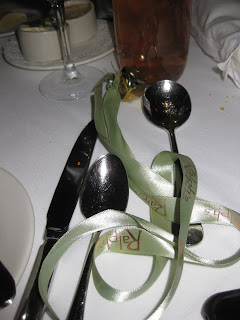