My husband’s business is very male-oriented, so it’s rare that I have the opportunity to meet other women through his work.  Fortunately, we’ve recently developed a new working relationship with a research group that includes ladies on their staff.  Most of them are scientists and I’ve really enjoyed getting to know a few of them.  So, when presented with the opportunity to go to lunch with these ladies and an excuse to treat it like a business lunch, I jumped on it! 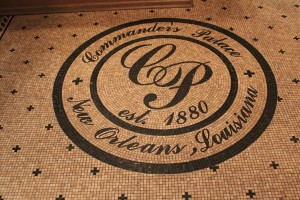 For this lunch, on December 15, C and I decided that we should bring Jodi, Darcy, and Heidi to Commander’s Palace, a New Orleans institution.  Yeah, us and half the rest of the city were there!  It was insane as we pulled up and dropped our cars off at the valet!  Once we finally managed to do that, we headed into the restaurant and I was very happy to see that we had one of the best tables, right in the middle of the main dining room.  C was at his most charming, cooing and smiling at all the girls.  It was so funny watching them react to his sweet ways and whip out their cell phones to take pictures of him over and over again!

The restaurant was bustling even though our reservation was one of the last ones of the day at 2:00.  They even had carolers roaming the dining rooms.  I was a little worried about that since C was showing signs of getting tired and I was hoping that he would be able to go to sleep, but it turned out that I needn’t have worried, because by the time the appetizers were done, he was out like a light! 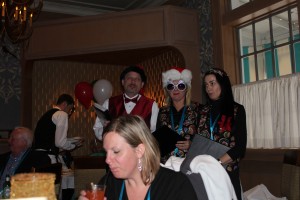 For my appetizer, I had a Duck Pot Pie which was incredible.  Unfortunately, I dove right into it and totally forgot about taking a picture.  By the time I remembered, it was long gone! I followed that up with Shrimp and Grits with a balsamic reduction.  Oh. My. Goodness.  So delicious!  It is a classic southern recipe and Commander’s Palace does it right! 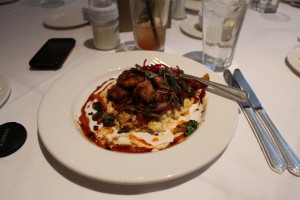 For my dessert, I got the warm pecan pie with ice cream and one of the other girls got the bread pudding soufflé.  The pie was wonderful and just perfect for the Christmas lunch celebration that we were having!  I was very surprised by the bread pudding soufflé.  As I’ve mentioned before, bread pudding is usually very heavy, but this dessert, well, as Jodi put it, “you can just taste the fluffy!”  I could have bathed in the warm whiskey cream sauce that came with it, but I resisted the urge. 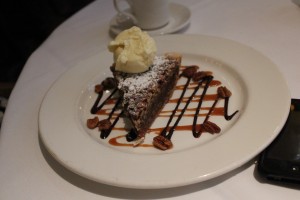 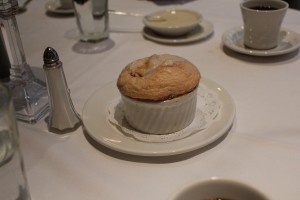 Our server for this wonderful meal was excellent.  She was perfectly cheerful when Heidi and I got there and had to wait a little while for the rest of our party (not long, they were just having trouble getting a cab), and after we were done, when I decided to give C a bottle that I had brought for him, she didn’t seem like she was worried about us leaving at all, even though we were the last party in the dining room.  Really enjoyed having her as our server!

The only downturn of the experience came at the very end, after I said goodbye to the other ladies.  I kept waiting and waiting for the valet to bring my car around, only to find out that they had, in fact, lost my car!  Remember when I said it was crazy out there when we arrived?  Well, apparently they forgot to note where they had parked my car (parking is all around the neighborhood on the street).  It took nearly 40 minutes of them running around the neighborhood like mad men before they got it back to me!  Oh well, I wasn’t going to let it get to me.  I had too good of an afternoon to spoil it by getting mad!

Six bells down, four to go! 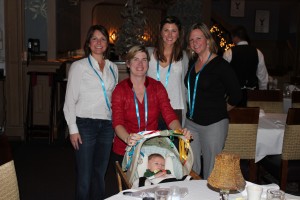 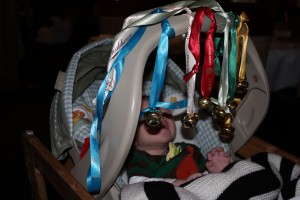